The geography of earth includes many bodies of water from streams, rivers and lakes to channels, seas and oceans with many of these terms overlapping in their definitions.

Is The Caspian Sea a Lake?

The geography of earth includes many bodies of water from streams, rivers and lakes to channels, seas and oceans with many of these terms overlapping in their definitions. Throughout human history all major civilisations built their cities near to large fresh water bodies, normally rivers, the most important natural resource for life. Sea or Oceans have also proved valuable to the economic growth of most civilisations and today they carry 90%of the world’s trade in huge ships (the exception to this was the ‘Silk Road’, a land based trade route set up to by various Chinese Dynasties to sell their goods). It was England’s and later Great Britain’s trade routes and Navy that allowed them to produce the largest Empire ever seen, an empire that covered a quarter of the globe and on which the sun never set.

The smallest body of water can be termed as a stream which describes a flowing channel of water that usually leads to a larger body of water. (This is not strictly true as it is also used to describe a warmer and faster moving body of water within other water bodies such as the gulfstream but this is not a common usage of the term stream). The term stream itself encompasses several other terms for moving bodies of water such as brook or creek. They are generally fresh water and are fed from many sources such as springs, ice melt, and even rain. They run from high to low ground being propelled by gravity but are too small to be noticeably affected by tidal forces. As their source can be intermittent so the streams may only exist intermittently but when more snow melts or rainfalls the water generally follows the same path as previous water flows have already made small channels for the stream to follow. Streams may feed many larger bodies of water including other streams that grow into rivers at a point known as a ‘tributary’ or ‘affluent’.

Rivers are much larger channels of flowing water that also flow from high to low ground and eventually they feed the sea. The point when a river flows into the sea is known as an estuary. Rivers can become considerably large and powerful. They carve out the landscape in a much more dramatic way then a stream and can create valleys and canyons. A very large and powerful river is believed to be the main contributor to the formation of the Grand Canyon millions of years ago. Rivers carve their way through the land by erosion. Rivers evolve over time feeding larger rivers at a point known a ‘tributary’ or ‘affluent’ (as with stream feeding rivers of other streams) as well as lakes and the sea.

No formal size classification has been made to differentiate between rivers and streams but the shortest river is believed to be the roe river in the US (at 200m or 61ft long and 1.2m or 8ft deep) but the D River also in the US is the smallest by water volume. The size of the Driver changes throughout the year but at its height it is a maximum of 3.6m or 30 ft wide, 36cm of 3ft deep and 130m or 440ft in length.

The longest river in the world is generally considered to be the River Nile stretching 6,853 km (4,258 miles) long (this length is based on a survey carried out in 2007 which increased the previous estimates by 200km (125 miles) and is based on the furthest possible distance from source to outlet). The Nile travels through eleven countries running from Tanzania in South-East Africa heading north to Egypt and out to the Mediterranean Sea.

Streams normally form at the peaks of mountains, sometimes melted ice sometimes from clouds which moved up the mountain and condensed as they cooled. There are normally several of these streams and they flow down the mountain and feed rivers, which move further down the landscape until they feed other rivers and flow out to sea. These systems of streams and rivers will form on all sides of a mountain but may be separated by a natural barrier such as a ridge. It is these barriers which are known as watershed. The system of streams and rivers are known as the drainage basin. Their name describes them well as they act as drainage for the landscape and flow towards the basin of the ridge or valley.

A pond is a small body of water that is surrounded by land. They can be fed by streams or rivers or they can be completely separated forming in basins from rain water. They can be man-made or natural and may be intermittent or a permanent features of the landscape. Many people have defined ponds as bodies of water which light can penetrate to the bottom throughout, but there is no official classification. 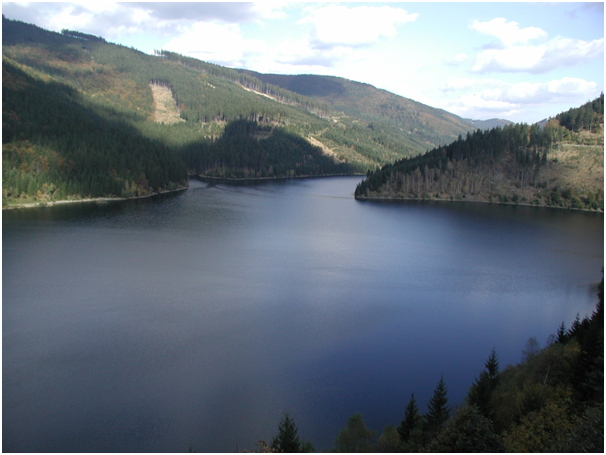 Lakes, like ponds, are surrounded by land but may be fed by streams or rivers which may also be an outlet for the lake. They can also be separate from river and stream systems and some form in the crater of volcanoes (volcanic or crater lakes) completely isolated. Lakes may also be manmade or natural and can differ immensely in size. No official size has been agreed upon to separate ponds from lakes but the smallest lake in the world is believed to be Lake Aiso in Italy (at 25 meters across and 13 meters deep) with Lake Superior in Canada with the largest surface area (82,414 km2 or 31,820 sq mi) or Lake Baikal in Siberia, Russia which is the deepest (1,637 meters or 5,314 ft but growing wider and deeper each year) and contains around 20% of the worlds surface fresh water. Many of the larger lakes are so massive that the effects of gravity from the moon and sun can be observed in the form of tides similar to the oceans. 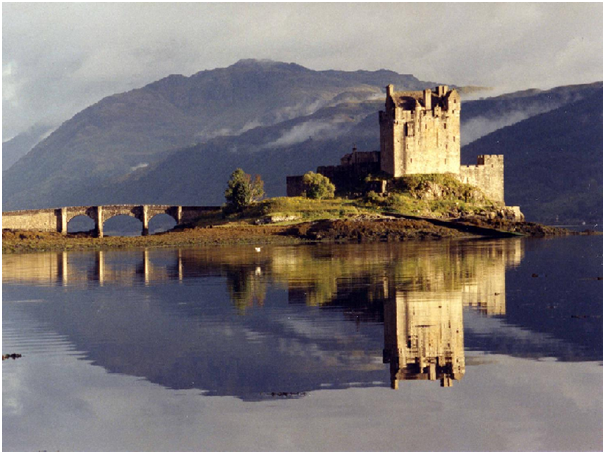 Is The Caspian Sea a Lake?

The Caspian Sea certainly once was a sea. It was linked to the ocean and is why it is salty. If it is a lake, which many in authority claim, then it is the largest lake in the World by far at 386,400 square km (149,200sq mi) and contains one third of all inland water. It is argued that it is now a lake because it is no longer connected to the oceans and it only fed from fresh water sources. It is however argued by equally qualified experts, such as the United Nations Group of Experts on Geographical Names (the UNGEGN) that the Caspian Sea is indeed a sea. The UNGEGEN however have no legal authority over names and their normal policy is that the owner decides. The Caspian Sea is bordered by Azerbaijan, Iran, Kazakhstan, Russia, and Turkmenistan and each nation’s name denotes that it is a Sea. 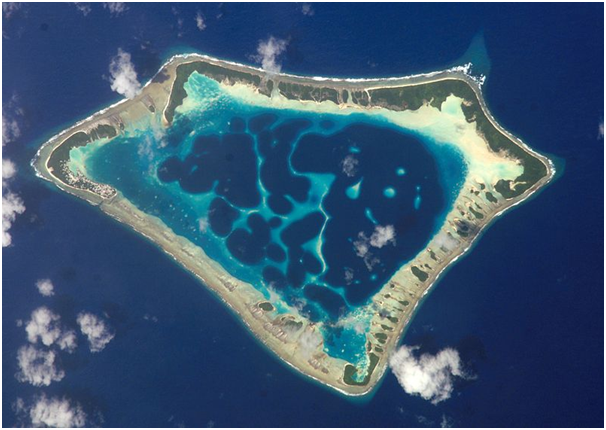 A lagoon is a shallow body of water that once belonged to a larger body of water by became separated by land or coral reefs. Most lagoons are salty, having formed from sea water, and are therefore found on the coast or on atolls. They are formed when land surrounding a shallow basin erodes allowing sea water to fill the basin.

They are like giant rock pools and their depth and overall size can be affected by the tides of the surrounding sea.

Despite being salty bodies of water the barriers give them more protection than ocean waters and this gives them a more varied habitat for the indigenous wildlife which is more similar to that of freshwater lakes. Additionally the salt concentration of some lagoons is changed by rain which floods the lagoon and, depending on the season, this can make lagoons freshwater for short periods.

Longest River – includes international rivers which extend through more than one country so the Nile River is displayed for all of the eleven countries it travels through (with exception of Canada (the 1% of the Mississippi runs through Canada)).

Coastline – Length of the coastline

Seas are large bodies of water which are generally regarded to be connected to the world’s oceans and by this definition the Caspian Sea would have to be classed as the world’s largest lake. Seas are bordered by land, in most cases partially, which allows ocean currents to continue and control the currents of the connected seas. In some cases seas can be more completely enclosed, such as the Mediterranean Sea, and have a small inlet to an ocean but are predominantly surrounded by land. This prevents the ocean currents from having a great impact on the currents of the sea. In the case of the Black Sea, which is fed by the Mediterranean Sea, it has such a distant connection to the ocean (around 2,000 miles) that it is almost entirely unaffected by Ocean currents.

The term sea includes bay, gulfs, straits and channels. The English Channel is a partially land bordered sea which feeds the North Sea which was created around 6 thousand years ago when a tsunami separated Britain from the continent. This is just one example of how huge floods from the melting of polar ice and tsunamis throughout history have shaped not only our land but also our seas.

The Oceans are the largest bodies of water found on Earth and these alone cover 70.1% of its surface containing around 1.3 billion cubic km (300 million cubic miles) of water. That amount of water existed on Earth in some form or another since its creation around 4.5 billion years ago but the Earth would have been too hot (and the atmospheric pressure too low) for it to have existed in liquid form for quite some time. However at some point in the history of earth the conditions became right for liquid water and rain began to fall. That rain would have fallen and hit the hot rocks below before the heat of the rocks caused the water to evaporate once more and as this process continued the rocks and surface of the earth eventually cooled. It would have rained beyond anything experienced since and for many millions of years until the Oceans formed. It is not known when exactly when the oceans as we know them had been created but evidence shows that ocean sized bodies of water formed at least 3.3 billion years ago. This water would have initially been incredibly acidic due to the sulphuric acid in the atmosphere and this acidic water broke up and dissolved the rocks. The minerals from these rocks dissolved into the water making it salty and this salt content soon became what it is today, around 3.5%.

Life began on Earth in either the oceans or rock pools at their edges around 3.5 billion years ago and this life evolved and populated the land and sea. The Oceans are home to at least 230,000 species.

Just as there was once a supercontinent which slowly separated and moved into the landmasses we know today there would have once been one super-ocean and the movement of the continents gave us the five Oceans. There are some that still consider all the oceans to be one global ocean without division known as the World Ocean. The Oceans as most people know them are:-