The Geography of Earth is unique in our solar system in that it is predominantly covered by water with the oceans covering 70.1% of the surface and with only 29.1% dry land (this is without taking into account all the lakes and rivers etc).

Six continent of the world

The Geography of Earth is unique in our solar system in that it is predominantly covered by water with the oceans covering 70.1% of the surface and with only 29.1% dry land (this is without taking into account all the lakes and rivers etc).

The land masses of the world are normally divided into seven continents. The term continent comes from the Latin “terra continens” meaning continuous land and this ambiguous term has led to many variations as to the number of continents.

Six continent of the world

There are a few variations in the six continent description of the world’s landmass. In the past it was considered that both North and South America as a single continent and this led to the Olympic symbol of five interlocking circles (Antarctica not included).

This view has now changed but some now consider Europe and Asia to be a single continent known as Eurasia as they are a single landmass. However this logic would also revert thinking back to America as a single continent and Africa being combined with Asia and Europe to form a super continent. This would allow the landmass of the world to be divided into four distinct continents of Afro-Eurasia, America, Antarctica and Australia.

Seven continents is the most commonly recognised division of the worlds landmass and this consists of (in order of size) Asia, Africa, North America, South America, Antarctica, Europe, and Australia (or Oceania which groups Australia with the many Islands of the Pacific).

The Geography of Earth includes approximately 180,500 islands dotted around the world in various sizes. The biggest of which is Greenland at 2,166,086 sq km while the smallest is Bishop Rock, off the coast of Cornwall at approximately 736 sq meters. The top ten largest islands of the world are as follows.

Grid referencing can only work if the grid reference number corresponds to the same numbers on the map (the same grid referencing system) but there are several well established systems that use different coordinates (so specifying the system used is required). Longitude and Latitude is a universal grid reference system which was established and agreed upon in the 19th century by delegates from around the globe ensuring that all nations follow the same system. 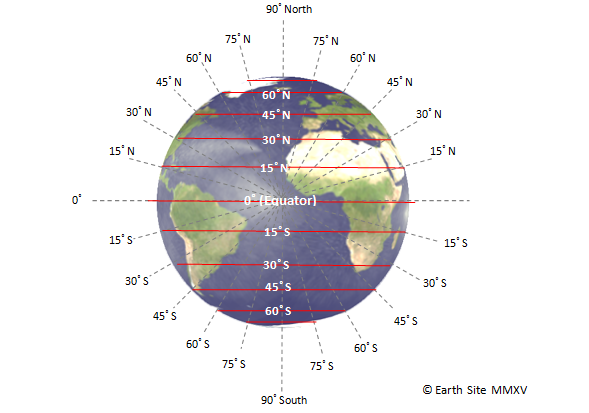 Lines of Latitude (sometimes known as the meridians) are lines that run horizontally across a globe. The best known point of reference on a globe is the Equator which is an imaginary line that runs horizontally across the planet half way between the north and south poles. This imaginary line splits the globe into the northern and southern hemispheres and makes a perfect starting point to begin dividing the planet into horizontal sections.

As the planet is spherical it has an angle of 360˚ in any direction. This means that there are 180˚ from the north to south poles or 90˚from the equator to either of the poles (half of 180˚). Taking the equator as a starting point this allows the globe to be divided equally into 90 equal sections North and South of the equator.

The coordinates of Latitude therefore are given in degrees north or south of the equator.

Example: Co-ordinates for the UK are 54 00 N, 2 00 W (based on the centre of the United Kingdom(latitude, longitude)

Sometimes more precision is required and therefore minutes and even seconds are added to the coordinates. 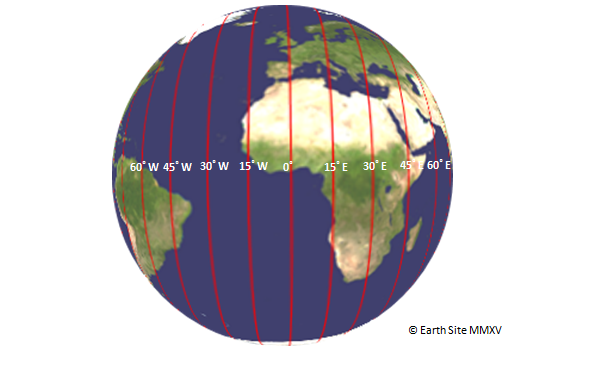 Lines of Longitude are the lines that run from West to East (also known as the meridian lines) and are the second set of numbers in a grid reference.

As previously highlighted the planet Earth is roughly spherical and therefore is made up of 360˚. Again this allows us to divide the globe into 360 equal vertical sections but we need a starting point from which to start the imaginary dissection.

In October 1888 an international conference discussed this very issue and it was agreed that the starting point – or Meridian Line as it is known – should run through Greenwich, London.

With this imaginary line agreed upon it was possible to dived the planet by 180˚ East and West of the Meridian.

Example: Co-ordinates for the UK are 54 00 N, 2 00 W (based on the centre of the United Kingdom(latitude, longitude)

Sometimes more precision is required and therefore minutes and even seconds are added to the coordinates.

On the 29th of September 1707 a Royal Naval fleet of 21 ships left Gibraltar and headed home to England but severely bad weather made navigation almost impossible and the fleet got turned around. They headed for what they believed to be an island of Brittany but they were actually headed for an island in Sicily. On the 22nd of October Four of the ships hit rocks and 2,000 men lost their lives in Britain’s worst maritime disaster. The British Parliament offered a prize of £20,000 (around £2,000,000 today) for anyone that could solve the problem of determining longitude around the world.

As the world was round its 360 degrees could be divided into 24 portions of 15 degrees which give us lines of longitude. So if you knew the time in a point of reference and the local solar time (using the method above) you could calculate your position (in this arrangement 1 degree equals a 4 minute difference). King Charles II ordered the construction of the Royal observatory in 1675 to “in order to the finding out of the longitude of places for perfecting navigation and astronomy” (Charles II). The problem was that all accurate clocks of the day used pendulums to keep time and the motion on ships disrupted this. By 1735 inventor John Harrison had created a time piece that used springs instead of a pendulum and this solved the problem.

Prior to this day all major towns and cities in the world set their clocks based on the position of the sun in their own area. 12:00 pm or noon was based on when the sun was directly overhead. This could be determined by placing a rod in the ground and when the shadow pointed directly north, south or disappeared (depending on the time of year) local time was set to noon.

This was adequate and served as a standard for centuries but with the introduction trains in the 1820’s, people would have to reset their pocket watches continually as they travelled long distances. To solve this a standard time was established throughout Britain using the solar time at the Royal Greenwich Observatory as a bases but the rest of the world still required a central point of reference.

The attended by 51 delegates from 25 nations around the world. On the 13th of October 1884 Greenwich was chosen as the standard time throughout the world from which all clocks would be set and the meridian line which runs through Greenwich would become the centre of longitude (just as the equator marks the centre of latitude).

London time became known as Greenwich Mean Time (GMT). For every 15˚ a country lay West of the Meridian would set its clocks one hour behind GMT and for every 15˚ East of the meridian they would set their clocks ahead one hour.

Interactive map of the Geography of Earth

Continent – The Continent in which the country resides based on the most common seven continent system (Asia, Africa, North America, South America, Antarctica, Europe, Oceania). Data used in the geography of earth interactive map.

Coordinates – Approximate global coordinates of the centre of a particular country using latitude (North/South) and longitude (East/West). Data used in the geography of earth interactive map.

Time Zone – Time Zone is based on the time zone of the country’s capital city (many countries cross many time zones and therefore need to specify –Russia for example crosses 11 time zones but in order to reduce confusion and create more uniformity Vladimir Putin decreed that some regions would synchronise their time with Moscow time reducing the number of observed time zones in Russia to 9). All time zones are shown as + or – Greenwich Mean Time (GMT) as adopted universally in 1884. GMT is sometimes referred to as Coordinated Universal Time (UTC) an almost identical system introduced in 1960 which is interchangeable with GMT. Data used in the geography of earth interactive map.

Bordering Countries – All nations that have land borders with a particular country with either the total length of the land borders or individual lengths of each border (in kilometres).  Data used in the geography of earth interactive map.

Despite the ratio of less than a third of the worlds surface being covered by land there appears to be more species of life on the land than in the sea. A study in October 2010 by the Census of Marine Life estimates Earth contains approximately 8.7 million species (plus or minus 1.3million) of Eukaryotic organisms (so not including bacteria and other prokaryotic life forms). A total of 86% (6.5 million) of these being land organisms. Of the remaining 2.2 million species believed to be in the seas it is predicted that 91% have yet to be discovered. This is largely thanks to the insects that have more species than any other phylum but another reason is for the vast variation in the environment found on dry land.

The geography of Earth is not flat but has a varied features such as mountains, hills, deep crevasses, canyons, mines and caves. The change in 3 dimensional levels of a planet’s surface is the study of topology and can effect the environment greatly. Caves and subterranean areas may be without sunlight causing them to be cold dark places where not much life survives.  A substantial increase in height can be just as debilitating to an abundance of life. As the altitude increases air pressure decreases and at extreme altitude the oxygen is too thin to breath.

Atmospheric pressure is measurement of the force imposed by the volume of atmosphere on a given area. The higher the altitude of a given point the less atmosphere is above that point and therefore it enacts less force upon that point.