Meteorology is the study of weather; its patterns, causes and effects. The Study of meteorology has enabled us to predict the weather with remarkable accuracy.

When atoms or molecules are supplied with heat energy they move around and the more energy supplied the more they move. This movement causes the molecules to take up more space than their colder counterparts.

The illustration above shows the relationship between the increase in temperature (energy) and the motion of the air molecules. The molecules do not move in such a uniform pattern but as shown they do take up more space when supplied with heat energy. The molecules on the right have the same mass as those on the left but because they take up much more space the amount of particles in a given area is less. This causes them to act as if they are lighter then the surrounding molecules and therefore they rise. This is the process that causes hotter molecules in gases to rise.

Rain is the precipitation of water from the atmosphere providing plants and animals with clean water they need to survive. Through a mechanism known as ‘the water cycle’ rain water is continually recycled with many contaminants removed in the process.

The same process that causes hot gases to rise has a similar effect in liquids which is why hot water rises to the top of a bath, for example. In general water molecules are bound to the main body of liquid by surface tension but occasionally some molecules have enough energy to break the bonds and became vapour. This process – known as evaporation – is much more visible when water reaches its boiling point of 100˚C. At this temperature water contains enough energy for all the molecules to break free and water changes from a liquid into a gas but the process of water becoming vapour happens slower at lower temperatures and even below 0˚C.

When ice or snow on mountain tops is hit by warm winds it can turn to vapour going from a solid to gas and by passing the liquid phase completely. This process is known as sublimation and a small percentage of the water vapour in the atmosphere does come from this method.

Another process that accounts for about 10% of atmospheric water vapour is from plants in a process known as Transpiration. Soil often contains moisture, and while some of this water evaporates, much of it finds an alternative route into the atmosphere. Transpiration is a process by which water is drawn from the soil by a plant’s roots, then up through the stem and routes where it escapes into the atmosphere. If a plants roots are in moisture rich soil (which has a high water potential) on a day with low humidity (low atmospheric moisture concentration) a plant’s leaves are in contact with dry atmosphere (which has a low water potential). This creates a water potential within the plant and a natural process occurs (which requires no energy from the plant) which draws water through the plant. During the day the stoma on the leaves of the plant are open to allow the uptake of CO2 for photosynthesis and it is through these holes that most of the water drawn from the routes is released into the atmosphere. Some moisture is released from other points of the plant but only a fraction of the amount and therefore many factors including the amount of sunlight affect the amount of water released into the atmosphere through Transpiration.

The higher the altitude the less amount of atmosphere there is and therefore the atmospheric pressure decreases. Less pressure means that the molecules are more free to move around but, as we have shown in the section above on airflow and winds, it requires energy for the molecules to move. The energy used is heat energy and so as air pressure decreases it causes molecules in the atmosphere to lose their heat energy and they cool.

As the water molecules rise to higher altitudes their heat energy is absorbed by the surrounding atmosphere and they begin to cool. With less energy the molecules are forced to reduce their motion in a process known as condensing or condensation. The molecules become more tightly packed and they form a liquid once more. 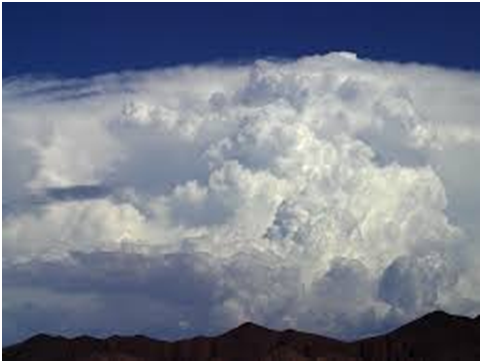 Artwork released into the public domain by www.wpclipart.com