Planet Mercury is the smallest planet in our solar system and orbits closest to our Sun. It is named after the messenger of the roman gods due to the speed of its orbit.

The Smiling Face Crater on Mercury

The Surface of Mercury

Where in the Universe?

The Orbit of Planet Mercury

According to Newton’s laws of gravity the planets should orbit the sun in a certain way unless they are influenced by external forces.  And they do, all that is, except the planet Mercury. For hundreds of years the exception in Mercury’s orbit led scientist to believe that another much smaller planet, named Vulcan, must exist between the Sun and Mercury. But in 1915 Einstein’s Theory of General Relatively managed to explain the anomaly.

Mercury has an elliptical orbit of the sun which varies from about 47 million kilometres to 70 kilometres out from the Sun. Mercury is named after the messenger of the Roman gods due to the speed of its orbit. Travelling at about 50 kilometres per second (31 miles per second) it takes it 88 Earth days to make one orbit of the Sun. Mercury has a very slow rotation speed, so slow that 1 Mercury day is equivalent to 58.6 Earth days meaning Mercury has only 1.5 days in its year.

Being that close to the Sun and spinningso slowly means that the planets surface can reach temperatures of 430 °C (806°F or 703°K) in the day time but without an atmosphere the heat is lost quickly at night with temperatures dropping to -180°C (-292°F or 93°K).

Mercury is not an easy planet to study as it is relatively small and the closest we ever come to one another during our orbits is 80 million kilometres (50 million miles). When planets pass in front of the Sun (their transit) they produce a shadow which can be viewed from Earth but due to the intense, bright light produced by the Sun, Mercury’s miniscule shadow is not visible in full daylight and has to be viewed during twilight.

The image of Mercury’s transit of the Sun (Credit NASA) can be viewed from Earth only 13 times every 100 years. On the 7th of May 2003 NASA’s SOHO and TRACE spacecraft took these images of the dot that is Mercury in front of the enormous Sun.

NASA has sent many space craft to Mercury in order to get greater insight, managing to map the entire surface. One of these Spacecraft is called Messenger (MErcury Surface, Space ENviroment, GEochemistry and Ranging) was the first object to orbit Mercury; the images it took were transmitted back to Earth.

The Smiling Face Crater on Mercury 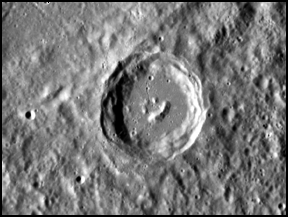 The Surface of Mercury

NASA recently released this image retrieved from the MESSENGER spacecraft. The image doesn’t show the natural colours of the planet Mercury but instead is produced by various apparatus on board MESSENGER. The blue colour displays various mineral deposits and the yellow shows volcanic activity.

Mercury’s surface resembles the moon where it has been bombarded by meteors and comets yet it’s make up is similar to ours in many ways. Billions of years ago, it was a hive of volcanic activity and as it cooled its radius shrank by a couple of kilometres. The crust contracted and strengthened trapping a layer of molten rock about 600 kilometres thick (Mercury’s mantel). Like Earth it also has a very large iron core which is about 75% of the planets radius making it the second densest planet in our solar system beaten only by Earth.

Where in the Universe?