Planet Uranus is unique in our solar system in that its Obliquity or axil tilt is more than a right angle to its Elliptical path (its actual obliquity is 97.8˚).

Why is Uranus the Coldest Planet?

Planet Uranus is the seventh planet in our solar system and unique in that it’ rotational axis is almost horizontal. Its striking blue-green colour is due to its methane rich atmosphere.

It wasn’t discovered until 1781 when telescopes had been in use (whereas the planets closer to the sun had been observed for thousands of years) and it took over 200 years to discover Uranus had rings.

Uranus is an ice giant made up of over 80% icy water, methane and ammonia. It is the coldest planet in our solar system with atmospheric temperatures reaching as low as -224˚C or 49.15˚k.

Uranus lays just over 18 Astronomical Units (1 AU is the average distance between Earth and the Sun) from Earth which made seeing this gas giant impossible from earth without the use of a telescope. Because of this Uranus was the first planet to have been discovered in the ‘modern era’. It was discovered by German born British astronomer and composer Sir William Herschel on the 13th of March 1781.

The image on the left is a portrait of Sir William Herschel painted by Lemeul Abbott in 1785. The image on the right is of a replica of Herschel’s telescope which he helped build and used to discover Uranus.

Herschel also discovered two moons of Uranus, Titania and Oberon, on 11th of January 1787 as well as two of Saturn’s moons, Enceladus and Mimas on the 28th of August 1789 and 17th of September 1789 respectively. He also calculated that the Milky Way was disc shaped and made many more discoveries.

Some years later another German astronomer, Johann Elert Bode, had been studying the planets orbit when he suggested the name of Uranus. His logic for the name was this. Saturn was the father of Jupiter and Uranus was the father of Saturn.

The new name was slowly accepted becoming the common new name for the seventh planet by around 1850.

At right angles to a planets equator runs its axis or celestial pole, the centre point on which the planet spins. The path which the planet orbits its sun is known as its orbital path or ecliptic. The Obliquity can be calculated by measuring the difference in angle of the planets equator and ecliptic. This is the same value as the axil tilt which can be calculated by measuring the difference between the axil and the right angle of the ecliptic or orbital path.

Uranus is unique in our solar system in that its Obliquity or axil tilt is more than at right angles to its Elliptical path (its actual obliquity is 97.8˚).

The reason for the extreme obliquity of planet Uranus is unknown but it is believed that in the wild and unpredictable setting of the early solar system Uranus was struck by and Earth sized object that turned rotated it to its current position.

It is the obliquity that causes the planets to have seasons some of which a negligible, such as on Mercury that has a obliquity of 0.03, while Uranus has extreme changes to its seasons.

Planet Uranus takes around 84.3 Earth-years to orbit the sun and so each of its seasons last a little over 21 earth-years. Additionally because of its obliquity when a hemisphere is in winter it will remain in complete darkness for 21 earth-years. 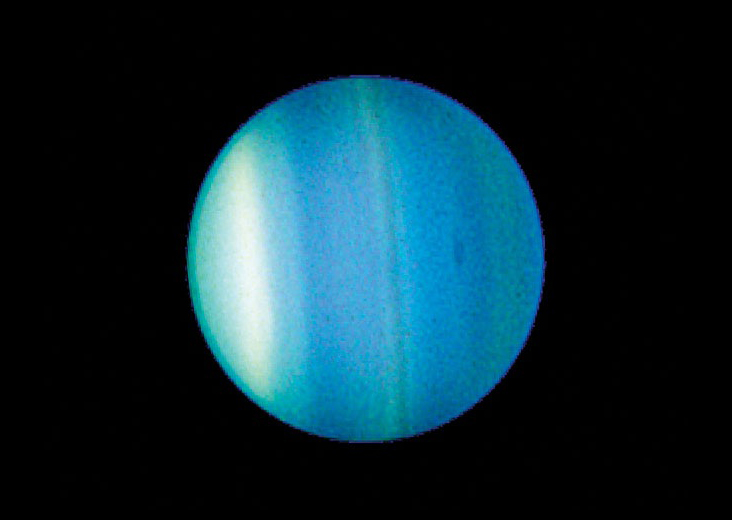 Why is Uranus the Coldest Planet?

Uranus is the coldest planet in our solar system with atmospheric temperatures reaching as low as -224˚C or 49.15˚k. This is several degrees below Neptune (coldest temperatures on Neptune reaches -218˚C or 55˚k) despite Uranus being some 2 billion km closer to the energy giving sun (Uranus 2.877 billion km from the sun, Neptune 4.498 billion km).

There are two current theories as to why this is.

One theory is that when the planet was knocked on its side, by the impact from an earth-sized object, the heat from its core was released into space.

Another theory is that a lot of energy is lost from Uranus during its equinox seasons (autumn and spring) due to the energetic atmosphere. 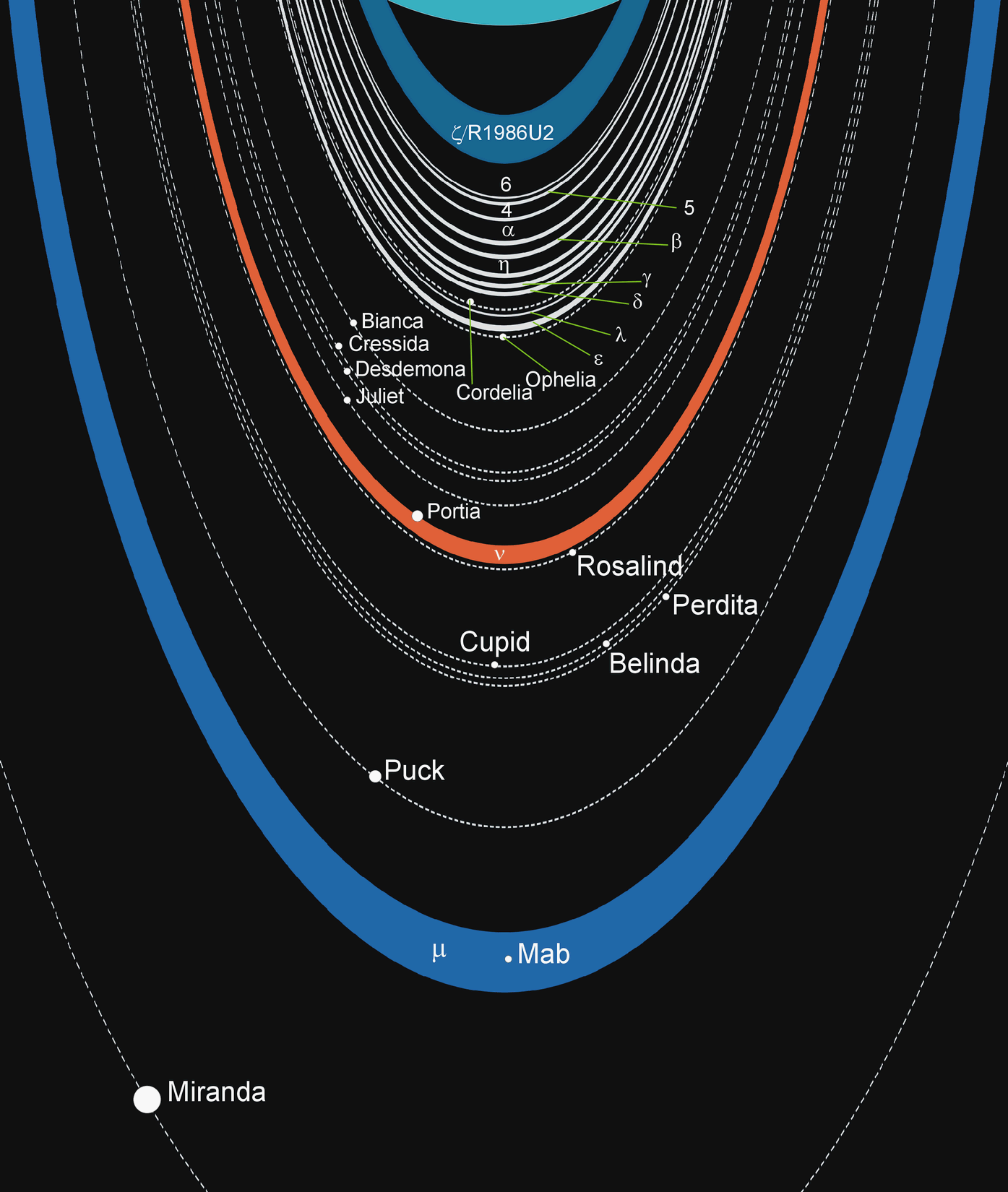 In 1977 the orbit of Uranus placed it in front of a distant star in relation to observers on Earth. This gave astronomers their first glimpse of the rings of Uranus, although only nine were visible at the time. Nine years later NASA’s Voyager II spacecraft, the only craft to visit the planet, discovered 2 additional rings. The last two known rings were discovered by the Hubble Space Telescope between 2003 and 2005 bringing the current total of known rings to 13.

The rings have only semi-sequential designation because of how they were discovered. Two teams of scientist observed the Uranus transit in front of the star (SAO 158687) hoping just to glimpse the planet. One team was in the Perth Observatory while another was a Team from NASA on the Kuiper Airborne Observatory (an observatory on board a plane). The NASA team discovered 5 rings and designated them Alpha, Beta, Gamma, Delta and Epsilon in order of distance from Uranus. Meanwhile the Australian team discovered 6 which they designated 1-6 (1-3 had already been named by the NASA team who published first). The remaining rings were named separately. In order of increasing distance from the planet, they are 1986U2R, 6, 5, 4, Alpha, Beta, Eta, Gamma, Delta, Lambda, Epsilon, Nu and Mu.