TThe planet Venus looked very tranquil and beautiful to early observers but it was hiding a very inhospitable environment.

Spin and Magnetosphere of Venus

Venus got its name from the Roman Goddess of Love and Beauty and to early observers its welcoming bright light and warm colours would have made it seem like a tranquil planet. It is the second brightest companion in the night sky second only to the moon due to its relatively close proximity and its ability to reflect light so well. But the reflective properties, that in part earnt its name, is caused by a very thick atmosphere of sulphuric acid. 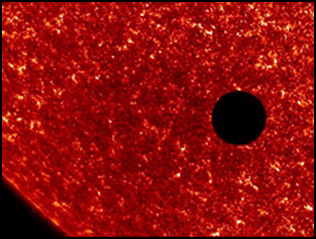 In 2004 NASA’s TRACE (Transition Region and Coronal Explorer) satellite took this image of Venus’s transit across the face of the Sun. This event happens twice (eight years apart) every 105 or 121 years when Earth is in the right position to see the Venus move in front of the Sun. The last time this happened was in 2012, with the next possible viewing from Earth will be in 2117.

Image of the transit of Venus taken by NASA’s SDO or Solar Dynamic Observatory between the 5th and 6th of June 2012.

The brightest planet in our night sky due to its close proximity to Earth and the thick cloud which reflects the Sun’s light superbly. This made spotting the planet very easy for early astronomers but the thick cloud has proved difficult in detecting the surface of Venus.

Only in modern times using special equipment mounted on space craft have we been able to look deeper into the planet’s make up and further measurements and discoveries have been possible by the use of probes actually landing on the surface.

The surface of Venus is littered with large volcanoes and it is believed that the entire surface was ‘renewed’ by volcanic activity about 500 million years ago. It has got large highland areas near the Polar Regions and its highest mountain ‘Maxwell Montes’ is about the size of our Everest. The acidic conditions of the atmosphere cause constant erosion of the surface rock and the fast winds cause sand dunes to form and change much like our deserts.

This is a computer generated image of a Venusian volcano created by the Magellan Team at NASA’s JPL (Jet Propulsion Laboratory). It shows Sapas Mons, a volcano 0.9 miles high and 248miles across, with lava flows shown as lighter hues.

Venus is a very inhospitable place for life as we know it. The atmosphere is made up of thick carbon dioxide which holds in the heat from the Sun helping temperatures reach over 470°C (878°F or 743°K). The thick atmosphere also is 90 times that of Earth and contains clouds which contain droplets of Sulphuric Acid as opposed to the water we are used to. In 2007 evidence of lightning was discovered but this atmospheric lightning was not being caused by water clouds as on Earth, Jupiter and Saturn but being caused by the clouds of sulphuric acid. Even probes sent to Venus are unable to survive for long in this harsh environment.

Using cloud-penetrating radar NASA’s Magellan probe managed to look through the atmosphere to discover the real face of Venus and map the surface.

Spin and Magnetosphere of Venus

Venus is one of the few planets that have a retrograde spin (clockwise from the most northern point) meaning that the Sun appears to rise in the west and set in the east.

Although Venus has a large iron core its spin is too slow to create a magnetosphere such as ours leaving little or no protection from solar storms. Its thick atmosphere does however give Venus protection from small meteorites as they break up easily in its atmosphere. Evidence of this is the craters on the surface which are very large, meaning only the largest of meteors make it through.