Hydrogen is the lightest and most abundant element in the universe.

Hydrogen was discovered in 1766 by English physicist Henry Cavendish.

Hydrogen is the most abundant element in the universe with nearly 90% of all visible atoms being hydrogen. The first atoms ever created after the Big Bang would have been that of hydrogen and helium which eventually culminated into stars. Due to the intense heat and pressure within the stars the hydrogen is in a state known as plasma and nuclear fission turns the hydrogen atoms into Helium, the next most abundant element.

On earth Hydogen is most abundant in the sea where it has been mixed with oxygen to create water.

Hydrogen is used in the production of ammonia (NH3), ethanol (alcahol(C2H5OH)) and hydrogen Chloride (HCL) among many other uses.

On the 1st of November 1952 the United States of America tested their new Hydrogen bomb which greatly exceeded their expectations.

The early Hydrogen bombs fused hydrogen nuclei (nuclear fusion) unleashing terrific amounts of energy, even more than that of the atom bomb which used nuclear fission to split the atom. Modern Thermonuclear weapons use hydrogen fission as a trigger to trigger a secondary, more powerful nuclear explosion. 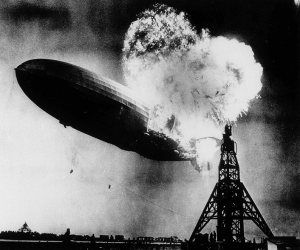 Airships were widely used pre 1940 in a variety of applications. Early versions used a Hydrogen filled pocket to produce lift as it is lighter than the surrounding atmosphere. The use of hydrogen was unsafe due to its combustibility which proved fatal, famously in the Hindenburg disaster.

Airships now use non-flammable helium which has become less expensive since the discovery of large deposits in America.

A more modern use for Hydrogen has been in fuel cells which can power cars and even buses instead of fossil fuels. The cells work by converting the energy from a chemical reaction into electricity. Usually hydrogen and oxygen are used which produces water vapour as a by product.